We distinguish a general and a site specific breeding programme.

The general breeding programme gives insight in the way the breeding and selection is done over all the different locations. Two key elements are:

Our scientific committee advised us to start with a limited number of breeds (around six) from two main sources: Iberian (from Spain and Portugal) and Podolian (from Italy and the Balkan). These breeds and individuals have been combined in relatively small breeding groups, consisting out of 15 individuals as an average, with the exception of one bigger breeding herd of around 150 individuals (in Keent NL). Before you can start selecting, you need a broad base to select upon. Untill 2014/2015 little selection has taken place, because we needed numbers first. Selection will take place the following years. This will be done, based on a more detailed breeding program, taking into account also genetic features. This breeding program is being worked out by a phD of Wageningen University in close cooperation with our scientific committee. In the second half of 2015 the first scientific publication is to be expected (Maulik et.al., 2015 (in prep)).

For every new breeding location a site-specific breeding programme is written, in close cooperation with the area owner/manager. It takes into consideration site specific elements and for example whether or not cattle grazing is already taking place. Depending on features as carrying-capacity, available budgets typically at first a starting herd will be brought in. Depending on the results and on the adaptation of animals to the new surrroundings in later stages new animals will be brought in.

For example in the RewildingEurope area of Velebit (Croatia) we started with a herd of around 15 Boskarin cattle in 2013 and brought in a group of Sayagueasa cattle. Both groups are kept apart. The Saya herd gets Boskarin bulls and vice versa. In a later stage the total group will be mixed and - depending the results (also to be checked genetically) new breeds or individuals might be added to the group. 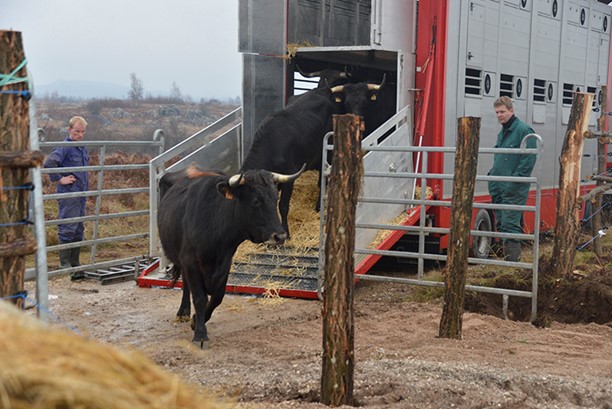