The Sayaguesa or Zamorana is an old cattle breed from Sayago in the province of Zamora west of Salamanca in Spain. Traditionally, Sayaguesas were used for pulling ploughs, carts and wagons. It’s a large-sized breed, with bulls weighing on average between 1000 and 1100 kg and cows between 650 and 700 kg. The bulls are black and sometimes still have a light eel stripe. The cows often are just slightly lighter than the bulls, since farmers select on black colour, but reddish-brown Sayaguesa cows still can be found. They also have the white coloured muzzle of the aurochs. The horns are aurochs-like and point forward, especially in the bulls. Sayaguesa is a long-legged breed with a curved backline and a long face. The breed is known to be hardy and robust and doesn’t need any shelter or supplementary feeding in the Spanish dehesa-countryside. Their behaviour is quite watchful and shy, and the cows will strongly defend their calves. 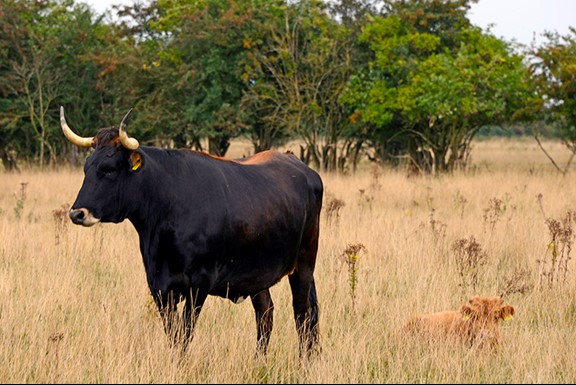