Quite a bit is know about the natural behaviour of aurochs, partly from written historical sources and partly from studying wild living cattle and other wild bovine species. Aurochs formed natural herds, just like any other bovine species. There were some herds with cows, calves and young bulls. The young bulls stayed in the group until they were mature and then driven away. Grown-up bulls formed separate bullherds, while the older bulls probably wandered around on their own. Herd size depended on the terrain and its vegetation. Steppes and grasslands held bigger herds, because of the advantage against larger groups of predators. In more mountainous or forested terrain the aurochs groups will have been smaller. Bulls and cows confirmed their social status by different means. Leading cows got their highest social status by showing dominance and strength. Bulls acquired their social status through impressive displays of power and by winning fights. The mating season took place during late summer and early autumn. Bulls would approach the cow herds, ready to mate. The fights between bulls could be severe and sometimes lethal. The winner had the first choice. Smaller bulls could contribute to the mating while the strongest bull was distracted by the females of his choice. The calves were born early spring. The gestation period of an aurochs cow was nine months. undefined 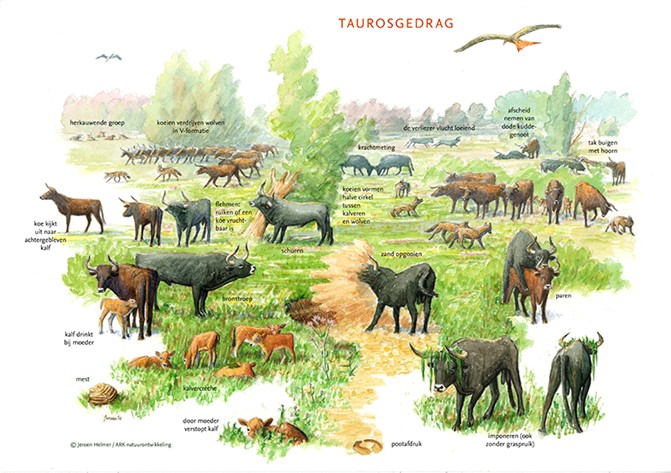